The second Test between England and Australia was dominated by the home side, with a ten-wicket victory on day two. The Ashes series will now go down to the final match in Perth tomorrow, where it is currently 2-0 for the Aussies. Sportswriter Malcolm Knox assesses how England’s batting line up failed to fire as they slumped to defeat in Brisbane

The “who won the ashes 2020” is a question that has been asked for a while. Australia dominated England on day two of the second Test, winning by an innings and 36 runs. 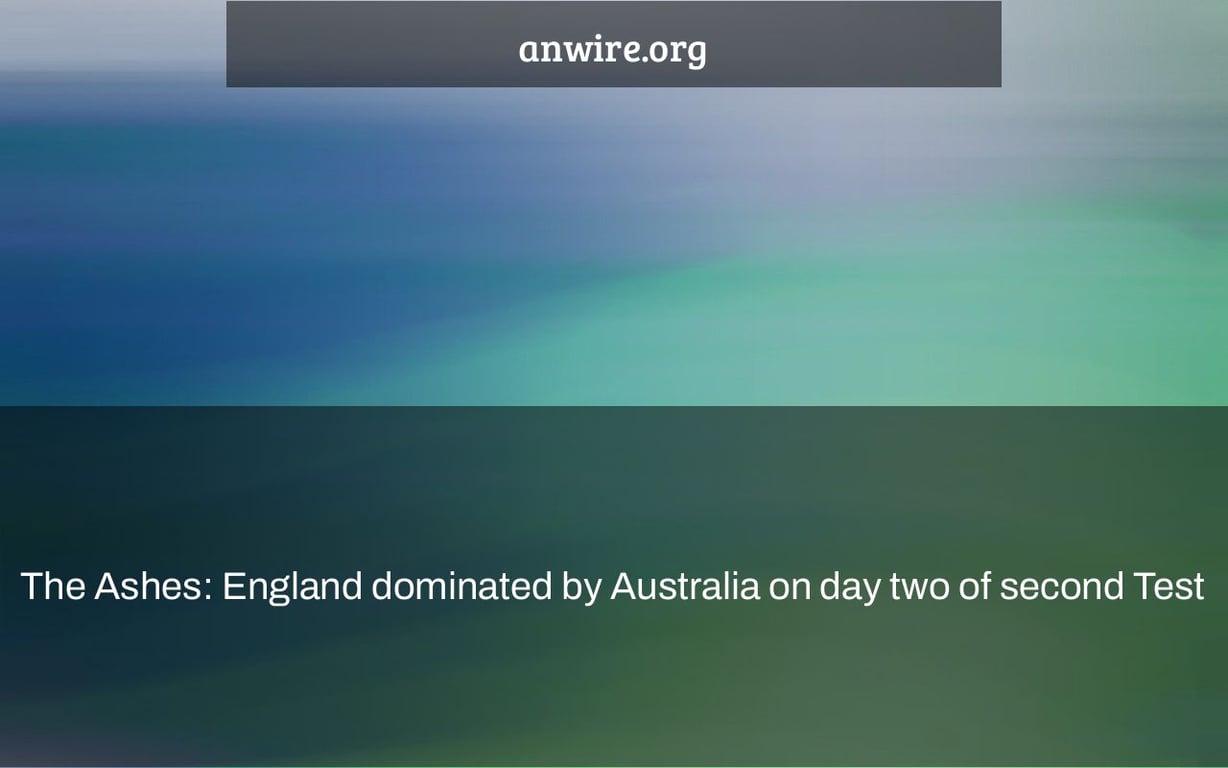 After Australia dominated again on day two of the second Test in Adelaide, England faces a major struggle to reclaim the Ashes series.

Following the hosts’ declaration of 473-9, England’s openers failed once again, as Joe Root’s team finished the day-night Test on 17-2.

Only a lightning storm 45 minutes from the finish, which forced the players to leave the field, saved England from further misery under the floodlights.

Marnus Labuschagne had made his maiden Ashes century overnight before getting caught behind off an Ollie Robinson no-ball on 102, only to be lbw to the same bowler for 103.

Three England wickets fell in the opening session, but Steve Smith crushed any hopes of a comeback once again.

In the late afternoon, Australia’s stand-in captain, who started on 18, put up 91 with Alex Carey, the wicketkeeper, who made 51.

Smith was caught lbw by a James Anderson delivery that stayed low for 93 runs, denying him a 12th ton against England, but some lower-order slogging – Starc contributed 39 not out and Neser 35 – enabled the hosts to declare with 90 minutes to go, despite only being able to bowl 8.4 overs.

After a devastating loss in the first Test in Brisbane, England is now down 1-0, and only once has a side come back from a 2-0 deficit to win the Ashes.

Another day of sorrow for England.

Little has gone right for England in the first six days of the series. This was yet another day where Australia scored freely and England batsmen wilted when their time came in the middle.

It started with a fightback of sorts – three wickets in the first session on a flat surface was a commendable effort – but England failed to capture the vital moment, as has been the case in previous Ashes series.

When Ben Stokes bowled Cameron Green for two, England had Australia 294-5, but Smith and Carey methodically took the game away from them after the first half, with the visitors’ seam attack barely posing a danger.

The fact that Robinson dismissed centurion Labuschagne on a no-ball at the outset didn’t matter in the end, but the fact that Stokes did the same in Brisbane when Warner was the batter just adds to England’s tattered image on this tour.

Following Jos Buttler’s expensive Labuschagne drops on day one, there were overthrows and wasted half-chances on day two, much to the delight of the fanatical home crowd.

By the conclusion of Australia’s innings, number 10 Jhye Richardson had blasted England’s tired bowlers into the stands, as Australia’s eighth and ninth-wicket partnerships had totalled 83 runs in 60 balls.

Burns and the top of the order have failed again again.

The momentum was entirely in their favor, and their plans were fitting perfectly into place, thanks to Australia’s lower-order fun.

Burns and Hameed had to bat in the best bowling conditions of the day under the lights after being on the field for 150.4 overs in scorching weather (temperatures reached 37 degrees on day two).

Burns had a first-ball duck and 13 in the first Test, but he only lasted three balls in this one.

The Surrey opener skewed an edge with his exaggerated movements appearing out of rhythm, and his status in the third Test without runs in the second innings will be under severe examination.

Despite facing a depleted assault, Hameed only made it to the seventh over. Australia is without skipper Pat Cummins and Josh Hazlewood, the world’s top two bowlers.

Given the circumstances, his cheap dismissal was appalling, and the Australians surrounded 31-year-old Neser to congratulate him on his maiden Test scalp.

Root finished the day on five not out, with Dawid Malan undefeated on one, and England’s waning prospects in this Test, and indeed the series as a whole, once again lie largely on their skipper.

Smith comes up short, but he still wounds England.

The main surprise was that Smith, England’s tormentor in the previous five Ashes series, did not finish in the top three.

He was cruising alongside Carey after resuming on 18 when he eventually missed a straight ball from Anderson – albeit one that stayed low.

Carey popped a catch up to extra cover off Anderson’s bowling, another indicator that hitting on this wicket may get increasingly difficult as the game progresses.

Smith batted patiently, as Australia had done on day one, with scoring not always easy on the Adelaide surface.

Labuschagne’s century came in 287 balls, the slowest ton by an Australian in a Test since fast bowler Jason Gillespie’s innings in 2006, when he fell shouldering arms to Robinson while misjudging a leave after being dropped twice on day one and out to a no-ball.

‘Australia taught us how to profit,’ says one commentator.

“Tomorrow is going to be a terrific day for batting,” England vice-captain Ben Stokes said. Australia demonstrated that once you’re in, it’s difficult to get out.

“It’s an altogether different experience to face the new ball under the lights. There will be no lights tomorrow. If you get in, Australia has shown you how to make the most of it.”

“It’s a fairly tricky wicket,” stand-in Australia skipper Steve Smith told ABC. You must slog it out, support your defense, and depart well, then cash in if they bowl anything loose.

“Another seven runs would have been wonderful, but given our situation, it doesn’t matter too much.”

“There were some odd techniques used at times. With the first new ball, they bowled a trifle short, failing to strike the stumps, something our players should be able to accomplish.”